About The Point Lookout Branch:  Located in the quaint Town of Hempstead hamlet of Point Lookout, on the eastern edge of the Long Beach barrier Island, the Point Lookout Library branch is a bright and friendly building packed with popular book titles, magazines, major motion picture DVDs, and public computer access.  Open twenty hours a week, this branch of the main Library is a lively part of the community offering discussion groups, free wifi, toys for the kids, and copy/fax/printing services.

History:  The Point Lookout Branch of the Long Beach Public Library opened in April 1967 at 50 Lido Boulevard in Point Lookout, New York, and immediately became popular with vacationing NYC summer residents as well as the area's year round residents.  In 1995, the branch moved to 26B Lido Boulevard.  Suffering minimal damage during Hurricane Sandy, the branch reopened a few months after the storm and, in early 2014, moved to its current location at 79 Lido Boulevard.  In spring 2017, the Branch celebrated its 50th year with a celebration featuring stories, poems, and refreshments. 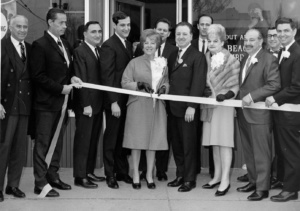 The Point Lookout Branch in the News: